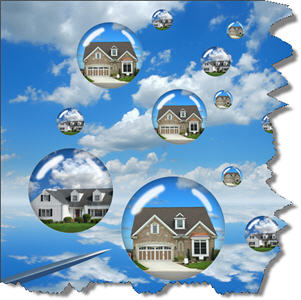 WASHINGTON — IN November, housing starts were up 23 percent, and there was cheering all around. But the crowd would quiet down if it realized that another housing bubble had begun to grow.

Almost everyone understands that the 2007-8 financial crisis was precipitated by the collapse of a huge housing bubble. The Obama administration’s remedy of choice was the Dodd-Frank Act. It is the most restrictive financial regulation since the Great Depression — but it won’t prevent another housing bubble.

Housing bubbles are measured by comparing current prices to a reliable index of housing prices. Fortunately, we have one. The United States Bureau of Labor Statistics has been keeping track of the costs of renting a residence since at least 1983; its index shows a steady rise of about 3 percent a year over this 30-year period. This is as it should be; other things being equal, rentals should track the inflation rate. Home prices should do the same. If prices rise much above the rental rate, families theoretically would begin to rent, not buy.

Housing bubbles, then, become visible — and can legitimately be called bubbles — when housing prices diverge significantly from rents.

In 1997, housing prices began to diverge substantially from rental costs. Between 1997 and 2002, the average compound rate of growth in housing prices was 6 percent, exceeding the average compound growth rate in rentals of 3.34 percent. This, incidentally, contradicts the widely held idea that the last housing bubble was caused by the Federal Reserve’s monetary policy. Between 1997 and 2000, the Fed raised interest rates, and they stayed relatively high until almost 2002 with no apparent effect on the bubble, which continued to maintain an average compound growth rate of 6 percent until 2007, when it collapsed.

Today, after the financial crisis, the recession and the slow recovery, the bubble is beginning to grow again. Between 2011 and the third quarter of 2013, housing prices grew by 5.83 percent, again exceeding the increase in rental costs, which was 2 percent.

Many commentators will attribute this phenomenon to the Fed’s low interest rates. Maybe so; maybe not. Recall that the Fed’s monetary policy was blamed for the earlier bubble’s growth between 1997 and 2002, even though the Fed raised interest rates during most of that period.

Both this bubble and the last one were caused by the government’s housing policies, which made it possible for many people to purchase homes with very little or no money down. In 1992, Congress adopted what were called “affordable housing” goals for Fannie Mae and Freddie Mac, which are huge government-backed firms that buy mortgages from banks and other lenders. Then, as now, they were the dominant players in the residential mortgage markets. The goals required Fannie and Freddie to buy an increasing quota of mortgages made to borrowers who were at or below the median income where they lived.

Through the 1990s and into the 2000s, the Department of Housing and Urban Development raised the quotas seven times, so that in the 2000s more than 50 percent of all the mortgages Fannie and Freddie acquired had to be made to home buyers who were at or below the median income. To make mortgages affordable for low-income borrowers, Fannie and Freddie reduced the down payments on mortgages they would acquire. By 1994, Fannie was accepting down payments of 3 percent and, by 2000, mortgages with zero-down payments. Although these lenient standards were intended to help low-income and minority borrowers, they couldn’t be confined to those buyers. Even buyers who could afford down payments of 10 to 20 percent were attracted to mortgages with 3 percent or zero down. By 2006, the National Association of Realtors reported that 45 percent of first-time buyers put down no money. The leverage in that case is infinite.

This drove up housing prices. Buying a home became preferable to renting. A low or nonexistent down payment meant that families could borrow more and still remain within the monthly payment they could afford, especially if it was accompanied — as it often was — by an interest-only loan or a 30-year loan that amortized slowly. In effect, then, borrowing was constrained only by appraisals, which were ratcheted upward by the exclusive use of comparables in setting housing values.

Today, the same forces are operating. The Federal Housing Administration is requiring down payments of just 3.5 percent. Fannie and Freddie are requiring a mere 5 percent. According to the American Enterprise Institute’s National Mortgage Risk Index data set for Oct. 2013, about half of those getting mortgages to buy homes — not to refinance — put 5 percent or less down. When anyone suggests that down payments should be raised to the once traditional 10 or 20 percent, the outcry in Congress and from brokers and homebuilders is deafening. They claim that people will not be able to buy homes. What they really mean is that people won’t be able to buy expensive homes. When down payments were 10 to 20 percent before 1992, the homeownership rate was a steady 64 percent — slightly below where it is today — and the housing market was not frothy. People simply bought less expensive homes.

Peter J. Wallison, a senior fellow at the American Enterprise Institute, was a member of the Financial Crisis Inquiry Commission.