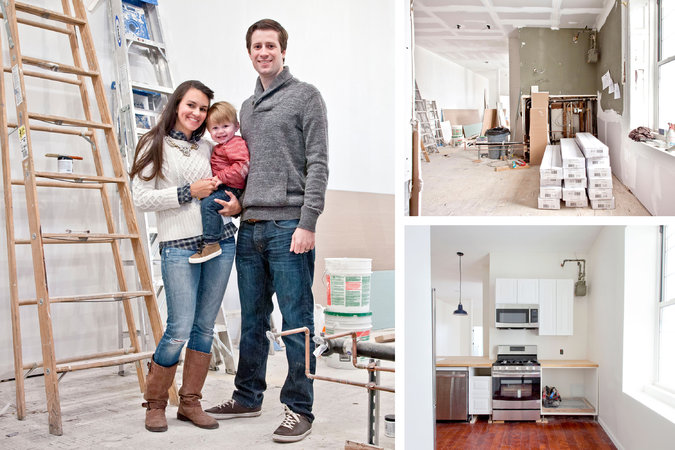 Kelly and Brandon Michon used plenty of their own elbow grease to clear out old carpets and remove layers of plaster, but got professional help for technical work like redesigning the kitchen, right. Katherine Marks for The New York Times

After finding a two-bedroom one-bath fixer-upper in the financial district last fall, Kelly and Brandon Michon went to work ripping out musty old carpets, dated kitchen appliances and damaged flooring; they scraped away layer upon layer of paint, wallpaper and plaster that had been slapped up over the years.

Now, with some hired professional help, the couple are finishing the second phase of an extensive renovation that will include everything from new electrical wiring and hardwood floors to a redesigned kitchen and bath.  The total cost: at least $45,000.

None of this would be unusual, except that the Michons are renters, not buyers.

Between appliance deliveries and diaper changes for their year-old son, Duke, Mrs. Michon has been chronicling the project at greenwichingeneral.blogspot.com. On the site, under an adorable family portrait, she uses a caption to pre-empt the reaction that most people have when they learn of their endeavor: ‘We are the nuts renovating our rental.”

Most people won’t spend a dime to improve an apartment, because they know that someday they will move out. Nor are many landlords willing to allow tenants to do their own renovations. But as rents begin to descend from record highs, brokers say, renters are gaining leverage.

“After years of escalating rents where there seemed to be no end in sight, now we finally felt a pause,” said Lyon Porter, a sales and leasing director of Town Residential, who has noticed more landlords offering concessions. “Before, it used to be absolutely not. Take it or leave it. I have a line out the door. Now there’s a real conversation and a negotiation.”

With their son beginning to toddle around, the Michons had outgrown their $2,500 rental studio in Battery Park City, but they couldn’t find anything larger in their price range. So when they spotted the listing for the bedraggled two-bedroom rental, they decided to go for it.

After about two months of negotiation, the couple worked out a deal with the landlord for a five-year lease and a significant rent concession. They would not give specifics, but said that in the end, they will pay well below the $2,950 a month that the rental was listed for in its pre-renovated condition.

“We get a break on rent, but put a significant investment in the property,” said Mr. Michon, a financial analyst who works on Wall Street. The deal, he added, “allows us to get a home without the mortgage and without having to search hundreds of apartments for something that suits our taste.”

“The improvement is enormous,” said Jeffrey Kahan, of JSK Property Management, based in Manhattan, who manages the building, a federal rowhouse built at the turn of the 19th century. The renovation is more ambitious and of a higher quality than most landlords would normally invest in, he noted. 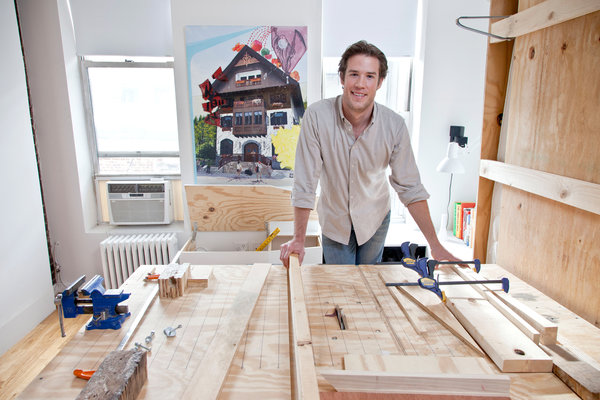 Going forward, he added, the apartment will be able to command a higher price. “I think the owners went out on a limb for it, and eventually, I think, they will be rewarded.”

Most rental management companies allow minor changes, like painting a nursery purple or putting up bookshelves, with the understanding that the apartment is to be returned to its original condition before the end of the lease. But that’s usually as far as they will go.

In fact, most leases contain a provision that forbids making any changes to an apartment without the landlord’s written consent. That is partly to protect against the possibility of building violations. If tenants want to build a wall to divide a room in two, for instance, they must meet certain requirements if the work is to remain within code. But the provision also helps avoid major customizations that wouldn’t appeal to the general tenant population.

“Your purple wall may not be my favorite shade of purple,” said Marina Higgins, the vice president and director of leasing at Argo Real Estate, a Manhattan management company. Even something that seems to be a significant upgrade may be the just opposite in the eye of the landlord.

“A very elaborate custom closet may be wonderful if you have an extensive shoe collection,” Ms. Higgins said. “It may be beautiful and it may have cost a lot of money, but we will be removing those fittings and doing something a little more user-friendly for a vast audience.”

Still, in a city made up mostly of rentals, there are exceptions to every rule. Kurt Franz, 30, a project manager for a Brooklyn-based real estate developer, created a fifth bedroom in his previous apartment, a TriBeCa loft that he shared with four roommates. He also built a large floating dining table by bolting a large slab of wood to a pillar in the kitchen. When the lease was up and the group decided to move, the roommates asked the landlord if the floating table and the fifth bedroom needed to be removed. The answer was no, Mr. Franz said. Instead, the landlord refunded their deposit and increased the rent for the next tenants.

Mr. Franz got even more creative at his current abode, a fourth-floor walk-up in the East Village that he found with the help of his former roommate, David J. Bucci, a real estate agent with Coldwell Banker AC Lawrence. The “shoe box” apartment measures about 360 square feet, said Mr. Franz, who moved in about a year and a half ago and pays $2,200 a month. To maximize space, he built storage benches and a Murphy bed. He extended the wall in the bedroom to create a big screen for a movie projector he hung above the bed. In the kitchen, he built an elevated dining banquette that doubles as a cot, and a table with a built-in flat-screen TV that slides perpendicular for viewing. Oh, and there is a small built-in keg.

It doesn’t hurt that Mr. Franz, who works in renovations, has a history of furniture design and repair. He estimated that he spent only $1,500 on materials, but it took roughly eight months of working each weekend to complete the project. The custom-made space, he said, is worth the effort. “After a chaotic day,” he said, “when you come back to something that’s really tailored to you “ I just enjoy it.” 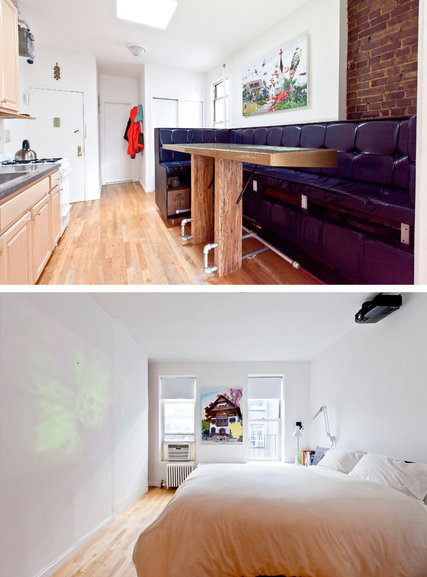 In the kitchen, top, Mr. Franz made a table with a built-in flat-screen TV and an elevated dining banquette that doubles as a place for guests to sleep. An extended wall in the bedroom serves as a screen for a movie projector he hung above the bed. Katherine Marks for The New York Times

His landlord has yet to learn about the modifications, but Mr. Franz does not expect any issues, especially since he was careful to make his changes and additions easy to remove. ‘Everything is built-in and customized to the space,â he said, âbut in actuality there are probably 12 screws in the wall.”

For some landlords, timing is important. One, Alan Dixon, an investor from Australia with a growing portfolio of more than 530 rental properties in New York City and Hudson County in New Jersey, said he was willing to incorporate renovation suggestions if prospective tenants made them before he began a project. He said he had done so about 10 times in the past 18 months, in properties like a two-bedroom in Jersey City that he ended up renting for $1,300 a month, and a Brooklyn townhouse that he then rented for $12,000 a month.

Last year in Jersey City, after he acquired a four-story brick rowhouse that he planned to gut-renovate and rent for $7,690 a month, a couple with two small children expressed interest in renting the place. He asked them for a “wish list” of things they would like done to the property. As the renovation progressed, he incorporated their suggestions, among them revamping the garden-floor layout with an open kitchen, relocating the laundry room, and opening the garage to the backyard.

Mr. Dixon says following the suggestions of his renters is good business. “If you’re already going to spend the money in renovation,” he said, “getting their input on what they’d like to see in the property is a positive move. You’re more likely to get a happy tenant, and after the initial two-year term, they’re likely to want to stay, accept a rental increase and see it more as a home.”

At the high end, many renters have specific ideas about how they want to live and how much they are willing to spend to do so.

After a divorce, with one child off to college and the other soon to leave home, Dee Dee Taylor Eustace, an architect and interior designer, decided to move to New York from Toronto to expand her business and indulge in “one magical year of living.” In June, in search of that “New York brownstone experience,” Ms. Taylor Eustace rented a $15,000-a-month Upper East Side duplex that had previously been used as an art gallery.

A closet was in such bad shape that if you looked up, she said, you could see through the cracks to the apartment upstairs.

But with 11-foot ceilings and three fireplaces, the place had character, and Ms. Taylor Eustace had the know-how to transform it. It took at least $30,000 to bring the place up to her standards, she said.

“I know that’s ridiculous,” she said, but she pointed out that the renovations had cost less than the purchase of a comparable apartment, and that they enrich her life every day. “I have my bed sitting in the bay window, and I feel like I’m having that “Sex and the City“ moment. I look at all the brownstones and the snow falling. It’s magical.”