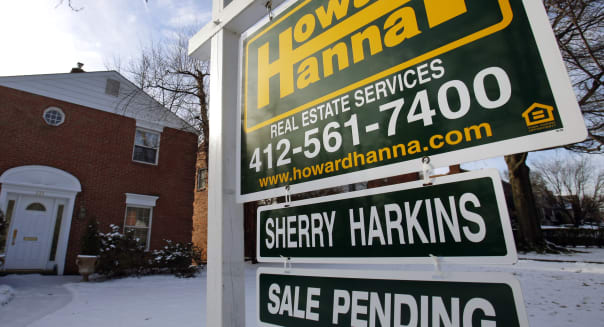 “November was a good month for home prices,” said David Blitzer, chairman of the S&P Dow Jones index committee. “Prices typically weaken as we move closer to the winter.”

Despite the overall decline, home values have continued to rise in many Sun Belt cities. Las Vegas, Los Angeles and Phoenix have registered 20 straight months of rising prices.

But home prices surged for much of 2013, driven by big gains earlier in the year. Prices have risen 13.7 percent over the past 12 months.

Dallas enjoyed its strongest annual gain since 2000. And Chicago home prices climbed at their strongest annual clip since December 1988. Among the cities in the index, only Detroit prices remain below their 2000 level.

The Case-Shiller index covers roughly half of U.S. homes. The index measures prices compared with those in January 2000 and creates a three-month moving average. The November figures are the latest available.

Some of the improvement in the housing market since 2012 has begun to slow in recent months. Rising mortgage rates and home prices have reduced affordability, an indication that the housing market will likely expand more gradually this year.

“Sellers used to seeing huge price gains month after month may feel some whiplash as that slows down,” said Stan Humphries, chief economist for the real estate firm Zillow (Z). “The housing market is still a long way from normal, but it’s getting there.”

For all of 2013, sales totaled 5.09 million, the best performance since 2006, when sales climbed to 6.48 million, the National Association of Realtors reported last week. But the sales gains in both 2005 and 2006 represented an unsustainable housing bubble. Analysts say a more normal sales pace currently would be around 5.5 million units.

Mortgage rates have also risen by roughly a full percentage point since spring, although they remain low by historical standards. Mortgage buyer Freddie Mac said last week that the average rate on the 30-year loan is 4.39 percent.

Some economists say the Case-Shiller figures overstate recent price gains because they include foreclosures. Foreclosed homes usually sell at steep discounts. As the proportion of those sales declines, the index rises more sharply.