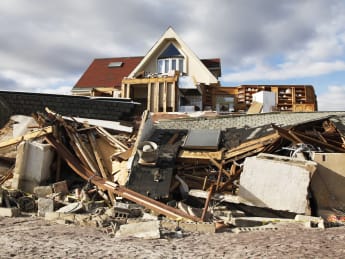 By Andrew Taylor – WASHINGTON — Flood insurance rate increases for hundreds of thousands of people would be put off under a bill on track to pass the Senate. Its future remains uncertain in the House, where a more modest plan is under consideration. The legislation, which could pass the Senate as early as Wednesday, would delay for up to four years premium increases set to phase in next year on homeowners facing whopping premium increases under new flood maps. It also would allow homeowners with subsidized insurance policies to pass them on to people who buy their homes.

Other changes, including higher premiums for frequently flooded properties and on 1.7 million second homes, would remain in place. The White House is cool to the measure, but it has not threatened a veto.

A sweeping overhaul passed in 2012 was designed to make the federal flood insurance program more financially stable and bring insurance rates more in line with the real risk of flooding. However, the new rates have caused panic among hundreds of thousands of people who face big premium jumps as flood maps are updated in coming years. The loss of subsidies when homes are sold has put a damper on the real estate market and threatened home values.

The Senate measure to delay some of the changes is likely to pass after votes on a host of amendments, including a plan by Sen. Pat Toomey, R-Pa., to phase in rate increases more slowly. Its future in the House was uncertain at best, where Speaker John Boehner, R-Ohio, and Financial Services Chairman Jeb Hensarling, R-Texas, oppose the Senate bill but are considering a far more modest measure that would leave more of the 2012 overhaul in place.

The federal flood insurance program, which was established in 1968, has incurred big losses, most recently with Hurricane Sandy in 2012, and is $24 billion in debt to taxpayers. The program helps 5.6 million policyholders, 20 percent of whom receive subsidized policies for older homes built before communities joined the flood insurance program.

Under the 2012 changes, owners of second homes, frequently flooded properties and businesses in flood areas would gradually lose their subsidies and pay 25 percent more a year until they reach an actuarially sound rate. Others get to keep their subsidies but can’t pass them on when selling their homes.

The 2012 law also phases out below-market rates for owners of “grandfathered” properties — those that were built in compliance with earlier flood risk estimates but whose flood risks have increased under new maps. Those homeowners would see their flood risks re-estimated and would see higher rates phased in over five years. Other homeowners, whose premiums subsidize those with grandfathered rates, could see their rates go down.